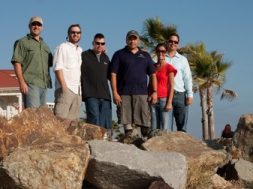 Spearfishing in the Pacific A unique adventure fell upon 1Sgt Joe Chadwick as he made his weekend plans. Getting underway with the rigors of preparing his Ft. Hood based, 1st Cavalry Company of Engineers, Chadwick called his wife Margie with instructions to deliver his dress blues to the cleaners for the Battalion Ball. She had no such plans to complete this task. “This was the hardest time I’ve ever had to hide a surprise from anyone,” Margie said. “What do you tell someone to get them to leave during a work up to deploy?” Margie had been working with Veteran Outdoors Staff member, Dan Robles, to deliver him to the Georgetown Airport for a surprise trip to San Diego. Here, with help from the San Diego area dive club, Los Pistoleros, he would take part in their first annual Operation Ocean Freedom, an event giving veterans the opportunity to experience spearfishing for just about any fish in the cold waters of the Pacific. Chadwhick, an 18-year veteran of the U.S. Army, was deployed to Iraq 2 times as an infantryman, and will commence his third tour this September, as the First Sergeant of Charlie Company, 4th Special Troop Battalion, 4th Brigade of the 1st Cavalry Division. At their office, the VO staff prepared to surprise him on his arrival, and even set up for his entrance to be tapped for an episode of their television program, which highlights surprise adventures of veterans submitted by friends and relatives. Robles, long time friend, predicted Chadwick’s response to the surprise. “He’ll walk in look right at me and say: What’s going on Dan?” said Robles.

Sure enough, Robles was right, as Chadwick stepped into the awaiting room his expression was that of apprehension and confusion. He soon understood he was the recipient of a trip that unveiled the hard work and generosity of the various people and groups that made the trip possible. Chadwick was handed gear from Game Guard Camo, ArmyBassAnglers and VO. STI International also donated a Model 1911 Spartan pistol, which would be presented as a final surprise upon their return. Robert Parker, of Corpus Christi, TX, and John Haffner, III, of Irvine, Calif., generously donated Southwest Airline tickets to deliver the group of five to San Diego. Without their enormous generosity the trip could not have been possible. Once in San Diego, the group was hit with the relief of the cool Pacific breeze and sixty-eight degree temperature. , of Los Pistoleros, was waiting to meet the group at the airport. After a quick introduction the weekend was in full swing. Staying at the Coronado Island home of Scott and Elise Darnell, the group dropped their gear and enjoyed a quick tour of the islands. As they stopped for a drink at the Hotel Del Coronado, Robles, was approached by curious children who inquired about his prosthetic legs. Robles leaned down and explained to them how they worked, while their parents explained the price these men paid for their freedom.

The following day was a day of learning. Guides for the day included Darnell, Heffner and Gerald McMurrey, of San Diego. Robles and Chadwick arrived on Darnell’s vessel to meet up with VO hosts, Cody Hirt and Brad Strittmatter, already in the water near Mexico’s Coronado Islands. Learning to free dive is learning a new environment, Chadwick said. The guides coached breathing, relaxation and movement in the water. After a quick instruction and time to acclimate to the water, the group traveled to the leeward side of an island frequented by scuba divers. Here, they spent the day diving, spearing small game fish with the accuracy of veteran underwater spear-fishers, and watching curious rays and sea lions. OOF Tournament day came with colder temperatures The sea showed a calm outlook when the VO group joined , Los Pistoleros, for an early morning’s start on Jeff Pate’s boat, Lucas J. Pate made everyone welcome on his beautiful sport fisher and made way to his favorite fishing spots around the Coronado Islands. Pate decided the Giant Kelp beds would be a productive start. Hirt, Chadwick and Robles, eager to dedicate the day toward hunting, hoped to spear a prized California Yellowtail, (Seriola lalandi dorsalis). They slowly traveled through the Giant Kelp forest watching the deep stretches of Kelp come from the dark water below. The day’s catch for the VO group amounted to a few Calico Bass and small game fish. Darnell, guiding the second boat, crewed by Strittmatter and Guy Skinner, of JBS, earned top honors for the day, with a Yellowtail that weighed in at around 30 lbs. The event was a success, owing special thanks to Los Pistoleros and Heffner for coordinating and hosting a great event benefiting veterans.