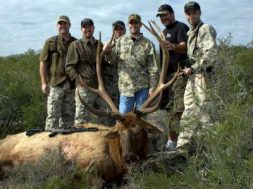 MSG Dan Robles helped Veteran Outdoors surprise a great friend of his that he met through rehab, SSG John Faulkenberry, with a once in a lifetime elk hunt on the W7 Ranch in Quemado, TX. The owner of the W7 was so moved by these two heroes that after SSG Faulkenberry took his MONSTER Elk, he decided to surprise us all by letting MSG Robles shoot a Trophy Elk too! And not only did MSG Robles get to go after an elk but they also pulled out the Big Boy for this hunt…the Barrett 50 Cal BMG!!! John is a U.S. Army…Ranger and was a squad leader of a quick reaction force while deployed to Afghanistan in 2007. A nearby unit came under ambush in a town near the Pakistani border, and began taking casualties so John’s squad quickly rolled in to get their fellow soldiers out.

Outnumbered by several hundred, John’s squad went back into harm’s way several times to assist the other unit. John got hit by several rounds from a PKM in the right thigh. The gunshots hit his femoral artery. John’s medic, who was also wounded, was able to get a tourniquet on and stabilize John. It was 2.5 hours before John was able to be medvaced from the battle field. The gunshots resulted in paralysis from the knee down, and John still suffers from tremendous pain. John is currently deciding whether it would be better to go ahead and amputate below the knee.  Even through all of this, John’s spirit and outlook on life are positive, and he wants nothing more than to be back on the battlefield with his brothers in arms.

Through the generosity of our amazing sponsors, we were able to present John with many wonderful gifts. Patriot Ordnance Factory sent over a beautiful rifle in .308 caliber (which John used to put two rounds into the elk off shooting sticks, both within and inch of each other from a little over 100 yards away), Winchester Ammo sent down some Supreme E-Tip bullets, GameGuard outfitted him from head to toe with the finest camo on the market, Love Hirt’s sent another touching Hero Cross, and Bear Claw Knife and Shear provided a knife that John’s sure to pass along to his kids someday. We’ve had the opportunity to hunt and fish with a lot of our nation’s finest this year, and John is definitely among the best of the best. He is one of those guys whom within minutes of meeting you know you will be friends with for a long, long time These two friends had the time of their lives on the W7…we’re so blessed to be able to show this amazing adventure and share SSG Faulkenberry’s amazing story during Season 2 of Veteran Outdoors!